Be careful when you’re with someone who talks about others.  If they talk about people they will talk about you, too. If you’re okay with that then proceed – but proceed with caution. END_OF_DOCUMENT_TOKEN_TO_BE_REPLACED

I realize all I’m saying here is technically it’s “none of my none of your.”  Which makes no sense at all.  But it is fun to say.  Much funner than to say “it’s none of your business.”  So, when I feel like I’m becoming a bit to Kravitz-y, I remind myself that it is none of my nunya.  In other words, nothing to see here, just keep moving. END_OF_DOCUMENT_TOKEN_TO_BE_REPLACED

A word to uplift

can have a huge impact

During a high school science class, we were asked to conduct an experiment.  My partner and I chose to focus on the effects of words.  It was a rather simple test.  We took two seeds and planted them in separate containers.  We made sure each received the same amount of nutrients – water and sun.  END_OF_DOCUMENT_TOKEN_TO_BE_REPLACED

If you’re on this earth you have an unfolding story. Good or bad, exciting or dull, long or short, it’s your story and only you know the details. You can share it any way you choose. Or you can keep it to yourself. But it seems kind of sad to not share it with anyone else while here. END_OF_DOCUMENT_TOKEN_TO_BE_REPLACED 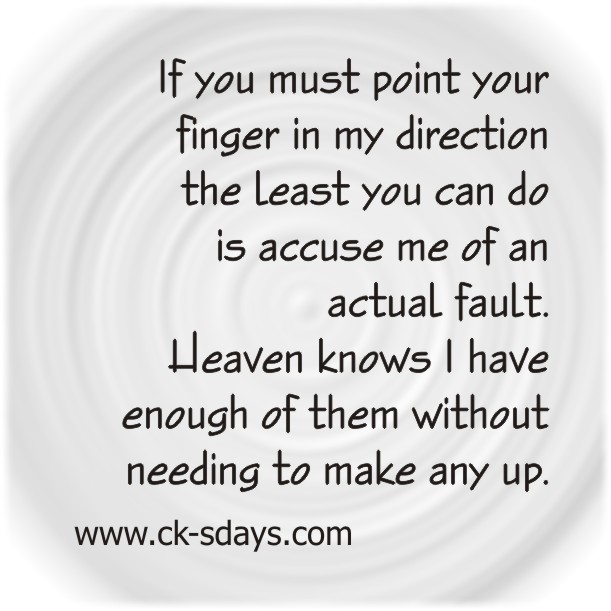 This meme came to me when I suspected some whispers were about me. It reminds me of this great quote from ‘It Happened One Night’ that Peter says during the bus scene:

“Listen partner, you may not like my nose, but I do. I always wear it out in the open so… if anybody wants to take a sock at it they can.”

Did I ever tell you

about a meeting I went to?

From the moment I walked in

I felt uncomfortable through and through.

Because I walked right in

to a big ol’ wolves’ den

but wait – they weren’t wolves

when I looked closer and again.

They were actually hyenas

each decked out in wolf’s clothing

and I walked right in

And that first howl

I heard caused chills up my spine

because they were just

about to feed and to dine.

Now bear with me here

and try to take heart

while I disclose their secret –

the most chilling part.

You see, they don’t eat flesh

but enjoy tearing apart a soul

seems to be their goal.

As soon as I left

I’m sure I was treated the same

my guess is they fed

and feasted on my good name.

of any hyena in wolf’s clothing.

those beasts are filled with loathing.

will send a tingling chill

straight up your spine.

Sometime during the first week of last July my brother mentioned there were “Changes coming” that could affect Girls’ Camp.  When I asked for more information, he smiled and said, “You’ll have to wait.”  What the heck?!  First of all, I was enjoying my state of obliviousness.    Just let me reside there permanently, please.  Second, why mention anything if you can’t divulge details?  He realized immediately what he had done and clamped down.  No information would leak from him.  From that point forward, that is.

The damage had been done.   My mind raced with possibilities.  Would there be a new ward?  A new stake?  A new temple?   Okay, those last two were a stretch but that’s how my mind works.  Was somebody being released?  Why would that person be released right before camp?  Oh, the possibilities!

I tried to force myself not to think about it.  I attempted to focus on other things.  But in the still of the night, his statement came fluttering back into the forefront of my brain.  “Changes coming.”  What could they possibly be?

Two things bothered me about his little tease.  One, I can’t stand suspense.  I like being surprised.  I really do.  However, there is one small stipulation before anyone out there throws me a surprise party.  Surprise me but don’t tell me you’re going to surprise me.  The suspense just about kills me.  Seriously.

Here’s an example. I blamed my pea-sized attention span for the reason I don’t read anymore.  After reflecting on this matter further though, I have come to a different conclusion.  My lack of reading is because I can’t wait for the conclusion.  There is no leisurely reading with me.  I drop everything else so that I can read.  So that I can find out the ending.

That’s why I’ve started reading the ends of books first.  Am I going to like this book?  Is this book worth investing my time?  I just borrowed the Hunger Game series from a friend.  She only gave me the first book though.  I had to text her today and ask, “Am I going to like how this series ends?!”  She doesn’t understand who she’s dealing with because she threw this big log on the fire, “Possibly.”  That had me worried so I continued,  “Aack!” Which translates to:  what did you get me into?  Then I begged, “Um, can I borrow the last book for a few minutes?” Long enough for me to read the end should be sufficient.  She responded with a text and I’m pretty sure it was accompanied with an eye rolling on her end.  “The person who borrowed it last is still reading it,” she explained.  And referring to the end she responded, “You’ll like it.”  Okay, it’s no sneak peak at the ending but it sufficed.  I’ll keep reading.

I’m glad my brother didn’t divulge anything else because of reason two, I can’t keep a secret.  If he would have told me, I would have started the grapevine.  It’s not like I want to be a blabber-mouth.  People just have a way of getting information from me.  It’s usually with a well-crafted, “Hi, how are you?”  And I spill.  Tidbits of information, especially juicy ones, just swell inside me.  If I don’t release them, via blabbing, they will cause me to explode.  And that would be gross.

My mom, bless her heart, was the same way.  It drove me crazy.  I used to complain about her not keeping all conversations in confidence.  There were some she kept very well.  But not all.  I suppose it was inevitable after all my complaining and whining that I ended up just like her.  I just don’t have a filter until after the fact.  That’s usually when I realize, “Probably shouldn’t have told you that.”

Let me clarify, I can keep a secret.  I’ve done it before.  It just about kills me and I prefer not to have to.  Here’s the disclaimer portion of this blog:  This mainly applies to gossipy type stuff.  When someone vents or unloads, I file that in my lockdown compartment in my brain.  It doesn’t get out.  I am trustworthy with personal information, just not so great in the gossip department.  So please, do not include me in the gossip circle.

For these two reasons, Christmas time is absolutely torture on me.  Not only do I have the suspense of waiting to see what’s in the packages with my name on them, but I also have to keep secrets.  I buy gifts.  I can’t tell.  Other people buy gifts for loved ones and hide them in my closet.  I have to remember not to blab what is being hidden there.  Sometimes it’s a very delicate situation.  I should start taking a vow of silence from Thanksgiving until Christmas day just to be safe.

I just looked over what typed and I probably said too much.  But what else is new?  Case in point.