We arrived in Berlin at 7:00am. Of course, we could not take any time to rest. We already lost one day. Our hotel rooms weren’t ready when we checked in at the hotel so we dropped our luggage in our tour host’s, KG,  room and headed out for the day. I wore the same clothes I wore on all the plane rides so I didn’t feel presentable.  In fact, I felt rather gross and stinky.  The pictures of me on this first day will never see the light of day if I can help it.  Not pretty.

We went on a tour of the city and I saw the remains of the Berlin Wall. We also went to Checkpoint Charlie and Brandenburg Gate. The thing about Berlin is it has layers of history. It holds era upon era with some scars from wars. We went into an old church and climbed to the top in a very old stairwell. The top still has charred marks from WWII. The history, we found out, is it was bombed during the war and caught on fire. The fire trucks couldn’t reach the top so the fire just had to burn out in the top portion.

My thoughts about Berlin: the wall wasn’t as forbidding as I pictured in my mind. It was smaller and looked weaker than I thought it would. Of course, that was without all the barbed wire and arsenal to protect it.

KG told us the Berlin Wall went up overnight and specifically included the Brandenburg Gate on the East side. The chariot on top used to face west but after the wall it was turned to face east. It still faces east today.

Someone in our group noted the lack of Hitler statues or memorials. We were told after the war many were disappointed because “he almost made it happen. It almost worked. ” But because of the world’s perception of the man no one dares to memorialize him. What would it be like to be the hometown of a man known as one of the most recognizable definition’s of pure evil in recent history? His quest for world domination and the amount of blood on his hands tarnishes his town that is working hard to be an economic world competitor. Even before the trip, when asked what I thought of Berlin the word that came to my mind was ‘militant.’

I asked our tour guide if people were excited about the wall coming down. “At first, yes,” she replied. Our bus driver noted that unemployment then spiked to 25%.

When we arrived at our hotel for the evening, I noticed it shared space with a store. If I would have known the opportunities for souvenir shopping would be so infrequent, I would have bought something then. But I waited.

As for the hotel, we found out, the two single bed rooms were set up in an “I Love Lucy” mode with the beds. Every. Single. Room. For the whole trip. Two single beds but next to each other. It must be a European thing.

The next morning we traveled to Freiburg and attended the temple. That’s where I learned to appreciate being able to hear the session without headphones. Between the headphone, the glasses, and everything going on in the ear region, my ears hurt by the end.

We also didn’t have the true experience of a dubbed language. Our headphones had the original language on them so the lips matched the dialogue.

The Freiburg Temple is the only temple to be built behind the Iron Curtain. It was dedicated in 1985 and the Wall fell in 1989. It is a small temple but not one of the ‘small temples’ that have become so popular the last few years.  You can read about the building of the temple here. According to our bus driver, it is in one of the most highly concentrated Neo-Nazi areas in Germany. As we were walking (lost), we saw a few traditional Jews. So, that is an interesting mix in a small area. It has the potential to be highly volatile.

After we checked into our hotel, we discovered an annual Freiburg Festival happening just a few blocks from us. As far as I can tell, it’s akin to our fairs and such here in the states. There was a carnival and family (and not so family oriented) fun.

We found another church and climbed another death-stairwell to the top. It’s surprising how little safety measures are taken for tourists in these places.

Our group got a little lost on the way back to the hotel and that set a pattern for us. Too many leaders; too many voices. I decided I’d just be a follower this trip. I didn’t fit in with all the competent and capable people… who kept getting us lost.

The descriptions among our group of our Frieburg hotel ran from ‘quaint’ to a ‘dump.’ I figured it was an old building that needed to be repurposed for modern needs. However, our bus driver said he figured the hotel was built clear back in the…70’s. The 70’s? I tried making an excuse for a building as old as…me? I take back the ‘quaint’ and now call it a ‘dump.’ 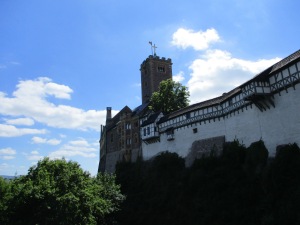 We left Freiburg Saturday morning and headed to Wartburg Castle. After taking a tour of the castle my takeaways are Queen Elizabeth of Hungary who became Saint Elizabeth. She was married as the ripe old age of 14 and died at 24. The other takeaway is Martin Luther hid in the castle while translating part of the bible from Latin to German. For an overview of the castle look here. 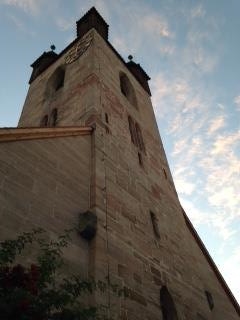 After the tour, we headed to Feucht for the night. We arrived and went for a walk. The only time we didn’t get lost. We found another old church but this one was closed so there were no stairs to climb. I’m not sure why we seemed drawn to churches but we found them. The town was quieter than Freiburg. GK’s perception of Germany is how clean it is. No litter in the streets. My perception: the uniformity of buildings.  The houses were uniform with very little variation in buildings. There was one modern looking store we passed while lost in Freiburg and I could imagine the uproar it might have caused to get it into that space.  I’m guessing.  The rest all conformed to the same pattern and shape.  Another group member noticed no street lights on at night. I noticed the graffiti. Any space had graffiti on it. One combatant the cities used against graffiti was ivy covered walls.

The next morning we attended church. A sister missionary from Los Angeles translated the talks for us. We listened with headsets. It was a wonderfully uplifting meeting on the other side of the world talking about things we hear every Sunday.  After Sacrament meeting we left and headed south to Switzerland.

My Europe Road Trip Part I