A visit to South Pass in 2013 prompted this post of an even earlier reflection writing. The site is now little more than an old ghost town near Lander, Wyoming but it is a special spot for me.  Years ago, while still in college, I took a week long history class that visited different sites every day.  The following semester, I took a writing class and was given the assignment to write about “My special place.”  I chose to write about South Pass.  This is my paper I wrote approximately 18 years ago.

At first glance, it was just like I remembered it.  The old mine tipple at the top of the hill.  The road the college van followed wound down the hill to the town before disappearing up the hill on the other side.  We pulled over to the parking lot in the small canyon but my eyes studied the continuing road.  As a young girl, the disappearing road represented something magical to me.  I often thought when we followed that road past the bend, I would see remnants of cowboys and Native Americans who I thought for sure still roamed the countryside.  Yes, I was kind of an odd sort of child.  In reality, the road was just a longer route back to the highway.  But as a child, I thought it was a magical stretch of road that possibly held a glimpse of history.   Like I said, odd child.

The field trip stopped so that we could go through the ghost town and eat lunch.

When I was a young girl my family went to South Pass City for a day trip at least once most summers.  The first thing I noticed on my college trip was what was once free, now costs a dollar to get in ($2 now).  A price on history.  South Pass Wyoming is a page out of history.  At one time, back in the 1800’s it was a bustling gold mine town.  But that was over a century ago and the legacy of cowboys and miners is now a line of dilapidated buildings.

The first building that always catches my eye is the hotel.  It is the tallest building still standing and the one with the most public access.  I can walk in and feel the stuffy air.  Each room has a glass cover prohibiting entering the individual rooms.  But it does allow a peek. A peek of history.  I enjoy the hotel because I am free to roam the long skinny hall and even walk up the narrow stairs.  Perhaps, walking in an ancestor’s footsteps.   I read the interpretation for each room.  “Only one room was heated the rest just piled blankets on the bed… It was not uncommon to wake up with frost on the blankets…  Strangers sometimes had to share a bed with someone who, like themselves, hadn’t bathed in weeks.”  Eww on so many levels.

Outside the hotel, archeologists were digging looking for remains of the butcher shop.  The trees behind the buildings hide the creek that runs in town.  During grade school field trips we were shown how the miners panned for gold in the creek and we were allowed to try our hands at it.  I didn’t have the patience to attempt it for too long.  Needless to say, I never found my fortune in gold at South Pass.

The buildings brought back pleasant memories to me.  But there is one building in particular I always feel compelled to see.

On the other side of the small town, the very last building on the left, I must keep tabs on and check out every visit.  It’s a small one room brown log cabin.  It’s not a particularly impressive building. But for me, it is the most important place in the whole town.  The cabin, at one time, had belonged to my grandparents.  My father spent many summers in his youth here.  This occurred before it became a ghost town.  A federal owned ghost town.  My grandparents never owned the land just the cabin.  When the government obtained the land my grandma was forced to either donate the cabin or move it off site.  We couldn’t afford to move it.  My grandma donated it but requested it remain known as the Lee cabin.  For years, it just sat there slowly falling apart.  Then it became a storage shed for awhile.

I walked around it trying to soak up my personal history.  Squinting, I tried to visualize my grandma and even my grandpa – who I’ve never met – on the hill a little ways while a younger version of my dad runs around the building to them.  So, I grew into an odd adult.

The image pops into my mind and lingers a bit.  I placed my hand on the wall to try and connect with the scene physically.  I noticed a small plaque on the cabin wall, “Reniker Cabin – a Civil War veteran.”  Quickly I withdrew my hand and looked down the street confused.  My face became hot and I knew my cheeks were a little red.  Had I been soaking up somebody else’s history? No, this was the right cabin.  Disappointed I looked at the cabin again.  I guess a Civil War veteran owning the cabin is more historic than a family spending summers there in the 40’s and 50’s.

I walked a little disheartened back to the car.  The town had become a new place to me.  My memories began to fade fast.  My only consolation was the fact that it was now time to continue the journey.  It was now time to go over the hill.

As we drove, my eyes surveyed the landscape.  A mountainous desert filled with sagebrush and clumps of trees here and there.  Rolling hills rolled past us.  I spotted a dirt wall and excitement again grew in me because I knew it wasn’t a dirt wall at all.  It was train tracks.  The tracks.  My thoughts slipped to another time.

Somewhere in the rolling hills is a perfect spot for camping.  My father and I had found it twice when I was young girl.  The first time, we had brought my older brother, or maybe they had brought me, I’m not sure.  But I do remember a couple of things about our camping spot.  For one thing, the now dormant tracks were right next to us.  They were on a manmade hill as we were in a small valley with a creek running perpendicular to the tracks.  A seemingly huge culvert allowed the creek to run under the tracks to the other side of the hill.  Our small valley actually had trees.  An uncommon sight in this area of Wyoming.  For somebody who grew up with sagebrush and dirt, I felt as if we were in a forest.

On our second trip a few years later, it was just my dad and me.  Our valley didn’t seem quite so big and the trees were dying.  “The beetle,” my father said and I believed him.  I didn’t know what a beetle even looked like, but I believed my dad.  The hill with the tracks stayed the same size.  It was as big as I remembered from our first visit.  I know, because I had to climb to the top again.  My dad climbed up with me and as we stood on the tracks he said, “Your grandpa worked on the railroad.”  My mind began racing, perhaps it was this very one.  I touched the track with my hand and tried to imagine my grandpa, who died before I was born working on this stretch of the railroad.

The culvert was big enough for even my dad to walk comfortably through it.  The drain opened up to a lush green field on the other side.  A neighboring camper told us a moose was spotted in that field earlier.  Or perhaps he just warned me that that field was the kind to lure a moose.  At any rate, I didn’t venture too long.  I wanted to be back to safety.  Back to my dad and back to camp.

The memories of the camping trips put a smile on my face again while riding in the college van.  I searched in vain for my little valley but could not find it.  I looked down at the brochure I had picked up in the visitor’s center back in town about South Pass’ history.  I know a small bit of its history.  I am part of its history; at least, I have history here.  I folded the brochure up and put it in my pocket and watched the scenery pass by.

I took a deep breath and searched in vain for cowboys riding their horses.  Because, like I’ve mentioned, I’m odd like that. 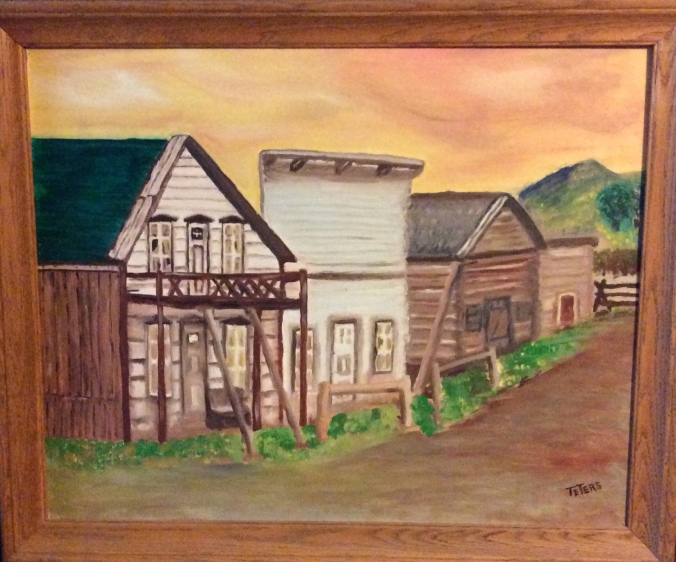 “South Pass” Artwork by my maternal grandfather Jack Teters given to my dad because of his special connection with South Pass. Picture then given to me because of this article.