The Netherlands (aka Holland)

I’m going to show my ignorance but before this trip I did not realize The Netherlands = Holland. I learned it right before we left when I was looking over my itinerary and tried to figure out when we were going to be in Holland since it wasn’t listed.

It took another full day of traveling to get us from France to The Netherlands.

We passed through Luxemburg but did not stop. 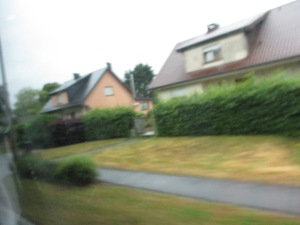 We passed through Belgium but did not stop.

We finally stopped at Valkenburg, Holland so that GK and her family could see their ancestral castle. I figured that was a family moment so I opted to each lunch at the castle remains with other members of our group.

KG,our travel host, only allowed one hour for Valkenburg which did not sit well with the Van Valkenburg clan. It all seemed so rushed. And wet. It rained the whole time we were there.   I did learn that ‘Van’ means ‘from’ in Dutch.  So, my friends are literally the family ‘from Valkenburg.’  I teased them that they came to storm the castle.  And I was the peasant (expendable pawn) help.

After lunch the other peasants and I gathered back at the bus. The travel host was annoyed the Valkenburg family still wasn’t back. However, this was a main point for them so I didn’t mind. When they got back to the bus I think the KG’s heart softened a tad when the patriarch of the family gave her a hug and thanked her for bringing them there.  Since I had watched the travel host stew while waiting I watched with interest her reaction.  How could she argue with a hug and tears?

We then rode a few more hours to Zoetermeer. After dropping our suitcases in our rooms we immediately set off on foot towards downtown to eat some dinner. There was no set plan and by this time everyone had their own idea of what to do and where to go. We found a mall and looked for a place to eat when who should round the corner? A group of about 15-20 young missionaries from the Church of Jesus Christ of Latter-day Saints who had just finished a zone training. We talked to them for a few minutes and they suggested a place for us to go to eat.

After dinner we walked around some more. This was the most lost we had ever gotten on our entire trip. We eventually found our way back to the motel after a long evening. Luckily, it stayed light until 10:00pm which was convenient.

The next day we went into Amsterdam.

The idea was to go see the Anne Frank museum. However, poor planning prevented this from happening. Tickets needed to be purchased online two months in advance or you can stand in line at 3:30. And the line goes down a block and around the corner.  It wasn’t possible for us to go to the museum because we had no time to wait in line.

I would have liked to see the Van Gogh or Rembrandt museums but since we were dropped off in front of the Anne Frank museum we didn’t have time to walk across town and get back at our designated meeting time.

Instead, we went on a canal tour and I couldn’t help but notice how much our captain resembled Captain Kangaroo. So much so, I wondered if Captain Kangaroo was actually Dutch. And still alive. Nah, couldn’t be. After the canal tour we walked around a bit. I finally got to do some souvenir shopping at the one place I liked least. We were warned ahead of time of pickpockets. In fact, there are signs warning tourists to be careful. This was the only place I tucked my travel pouch inside my shirt and kept my hand on it.

People were everywhere. There was a certain lawlessness in the air. From the distinct ‘skunk’ odors that wafted past my nose, the pickpocket warning, the litter and garbage everywhere, and the feeling of taking your life in your hands to cross the street or walk on the sidewalk, it just was not a comfortable place. So many people and I was surprised when I looked up the census later to find there are only 800,000 official residents as of 2016.

We found the Royal Palace and decided to take a tour since that was about all we had time to do. I noticed the religious artwork inside the palace seemed stern and strict. It was in direct contrast to the hopeful artwork of the Restoration that I saw later that day in the temple.  Outside of the palace, in the city square full of people I noticed people sitting on the front steps of the palace. Some of them may have been still sitting there when we left over an hour later. What do these people do that they can hang out in the city square for hours on a Thursday afternoon? Shouldn’t they be at work or something? What do people do in Amsterdam to make a living?

Amsterdam seems to be a place that wanted to cater to the whims and fads of the day. I’ll be watching it to see how it works out for them. I thought of this quote by Neal A. Maxwell: A society that permits anything will eventually lose everything. What will become of accommodating Amsterdam? Maybe nothing. Maybe.

We hurried back to the hotel in Zoetermeer to change clothes for the temple. Our final temple stop was The Hague. We arrived for a 7:30pm Dutch session. We were told that when the temple was constructed the artist painted a windmill in the creation room. President Hinckley told the temple overseers to leave it so we looked for and found not one, but two windmills in the creation landscape.

Our travel host was concerned that our bus driver needed to be back to the hotel by 10:00pm or pay a fine. So, when the session ended after 9:30pm our travel host quickly ushered us to the locker room. There was no time for sitting in the Celestial Room but I did take a quick peek at the chandelier. That’s about all I got to see.

An older sister missionary was in my locker so I couldn’t get in to change clothes. This proved to be stressful since we were in such a hurry. When I finally did get in to change I impressed everyone with my speed changing skills.

We walked out to the bus and our driver, Otto, had met an acquaintance. They knew each other because they were both bus drivers and they were reading the Book of Mormon together. We got back to the hotel a little after 10:00pm I believe.

The next morning we woke up and headed to the airport. We bid KG and her son goodbye. This next part of the trip had stressed me out all week. A foreign airport and an inexperienced traveler – what could go wrong?  What couldn’t go wrong?

I prayed for help to get through it.

I followed the four other members of our group who also checked luggage and was able to navigate the many lines. This was the most crowded, least user friendly airport of them all. The conveyor belt for our checked luggage was not working so we piled everything on the floor. I thought for sure I’d never see that suitcase again.

The conclusion will be Friday, August 25

My Europe Road Trip Part I

4 thoughts on “My Europe Road Trip: Part IV – The Netherlands”