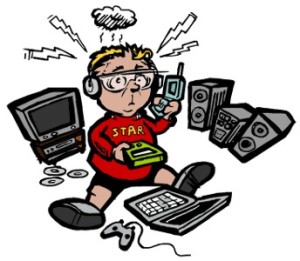 In case you missed it, I’ve been sick since Monday.  I even had to stay home from work Tuesday and half-a-day Wednesday.  My evenings have been spent glued to my recliner.  It all comes down to this:  I watched A LOT of media this week.  Not just my normal nighttime stuff, but extra daytime and early evening viewing as well.

I feel like the Intersect has been downloaded to my brain.  Don’t understand?  I feel like I’ve been hijacked with tracker-jacker venom and I’m trying to distinguish between what’s real and not.  If you are still clueless, let me try one more time.  I’ve watched a lot of mind-numbing television and surfed the internet for hours. In the process, I learned things I didn’t want to know.

Here’s a few gems from this week’s media overload.

As if once wasn’t enough, the 80mph wife and jerk-husband cycled again this week.  This time the viral video was “enhanced” with Erik Estrada.  You might notice I didn’t put a link to this video.  That’s because I hate it.  Your next question might be, “Well, why do you keep watching it and posting about it?”  First, I didn’t watch the whole thing (again), and second, I WAS SICK.  With a fevered brain I might add.

This clip reminded me of a few things to be grateful for.  The husband again reminded me that there are worse things than being single.   As for Mr. Estrada?  I think it’s a sad, sad commentary on our society when even fake cops can’t retire.  Do you think he keeps a CHiPS suit hanging in his closet for just-in-case moments such as this?  If so, how often does he whip it out?   And the ever-increasing creepy question, when do you think he uses it?

Alicia Silverstone made news this week.  You remember, the girl from Clueless.  Apparently, she chews her food for her 10 month old son and then feeds him mama bird style.  It never ends well for a kid when a mom learns parenting techniques by watching Animal Planet.  Personally, I still remember the horror of heading to church as a child and my mother looking at my face.  “You didn’t wash your face?”  She asked incredulously.  With one swift motion her two fingers went into her mouth and wiped off my face.  The technical term for it was cat-bath.  My personal name for it was, “Ick. Gross!”  The baby bird thing tops the cat bath.

It’s been awhile since I’ve watched Entertainment Tonight.  I have a couple of questions.  Where’s Mary Hart?  And who’s the guy with the Scottish accent?  I might have to start watching more often.  Anyway, the entertainment guru pointed out that Jennifer Lawrence, the star of the Hunger Games, apparently doesn’t wash her hands after using the facilities.  She called it “overrated” and claimed that the sink is full bacteria (as opposed to what’s on her hands after using the restroom?).  I had to investigate this further.  Apparently, it’s only public restrooms and the actress is already crying the “out of context” defense.  I hope it was taken out of context.  I really, really hope so.

Megan Fox.  Oh, Megan, Megan.  I don’t normally keep up with Megs since she has never done anything remotely interesting to me.  However, since I had time on my hand and a mouse bent on surfing, I did find this gem of a quote, “I would not trade my place with an unattractive girl.”  All I have to say is what a relief!  I can’t count how many nights I lied awake wondering what would happen if she came knocking and wanted all of this.  What would I be left with?  Brian Austin Green and her talent?  What? Too mean?  Don’t throw cake statements at us commoners and not expect the guillotine.    Someone in her inner-circle needs to pull her aside and whisper two words to her: Kelly Lebrock.  In response, Megan would reply, “Who?”  Exactly.

Maybe someone already has because I noticed her back-pedaling retraction came out hours ago.  Her statement was – you guessed it – taken out of context.  Maybe, and I’m just throwing it out there as a suggestion, maybe actors should use written scripts for their interviews.

Now for a little fun fact that made me laugh.  I actually heard this on NPR today at work.  Yes, when there are witnesses around I listen to NPR and save my ET viewing for when I’m at home alone.  Scientists are doing studies to discover why spiders don’t stick to their own webs.  I missed the whole purpose to this segment.  I’m sure it’s important.  Anyway, among one of the methods for studying is washing the spiders’ legs off.  Who gets that job?  And how hard is it to wash those little tiny legs without detaching them from the body?

And finally, what blog review of this week would be complete without mentioning the $640,000,000 lottery.  The optimists are snatching up tickets.  The rest of us are pointing out little stats the smarty-pants-stats men and women are figuring out for us.  Such as:  you are more likely to be struck by lightning than winning.  Or getting two holes-in-one during one game.  Or, my personal favorite, you’re 100 times more likely to die of a flesh eating bacteria.  But buena suerte to you!  Or, may the odds be ever in your favor.

I think I better de-tech this weekend.

3 thoughts on “I Think I’ll Spend Some Time Outside Tomorrow. Away from the tv and computer.”